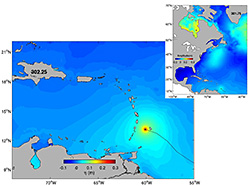 Canada’s Natural Sciences and Engineering Research Council (NSERC) has awarded Dalhousie University an NSERC Engage Grant to conduct research in cooperation with OEA Technologies Incorporated. The Investigation of Eastern Caribbean Sea Forecasting Models in Support of Climate Change Mitigation and Maritime Disaster Management will provide OEA Technologies with technical analyses of applicable models and forecasting systems, and will result in a pre-operational storm surge model for the eastern Caribbean.

Island countries of the eastern Caribbean Sea have few options other than to continue preparing for and adapting to the effects of climate change. Foremost among these effects are storm surge, waves from tropical depressions, and changes to ocean circulation patterns. Key to this adaptation strategy is infrastructure that monitors the Caribbean Sea and its coastal zones, and environmental models that forecast the behaviour of the sea.

This NSERC Engage Grant will allow OEA to tap into Dalhousie’s marine environmental forecasting expertise, with an initial emphasis on sea level rise and storm surge. Its primary objective is development of a fine-resolution (i.e. regional) storm surge model for the Eastern Caribbean Sea, which is nested inside a large-scale storm surge model for the eastern area of the North Atlantic Ocean developed by Dr. Jinyu Sheng at Dalhousie University. Creation of this nested-grid model will require Dr. Sheng to research temporal and spatial scales that provide practical forecasting results, and the ocean monitoring data required to initialize, constrain and operate the model.