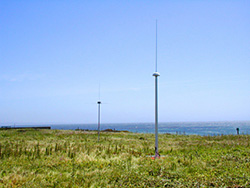 OEA Technologies Inc. and Akoostix Inc. have formed a cooperative alliance in pursuit of military and homeland security applications of CODAR SeaSonde HF radar data. Dartmouth, Nova Scotia, based Akoostix specializes in marine surveillance, ocean observation, software design, signal processing and data fusion, with a focus on underwater warfare and maritime defence. OEA is a recognized leader in the provision of oceanographic consulting services and is the exclusive supplier and technical support representative for CODAR HF radars in Canada and parts of the Caribbean.

“The coastal ocean observing community spent the last decade or so focusing on getting HF radar networks up and running.” said Dr. Brian Whitehouse, president of OEA Technologies, as he announced the cooperative initiative. “OEA sees this focus shifting to integration with maritime operations. Historically, the security sector has been on the vanguard of such operations and we see this continuing. As a result, we are particularly pleased to work with Akoostix and the world-class software design and data fusion capabilities that its staff bring to the ocean observing sector.”

“With the baseline sensing capability in place to provide data, Akoostix can leverage the SeaSonde’s data products to provide a world class solution. We have long understood that the concepts and much of the software that we’ve developed for underwater surveillance can be reused in complementary domains and we look forward to proving that this is the case for CODAR HF radar,” said Joe Hood, president of Akoostix, as he weighed in on the benefits of the alliance. “CODAR HF radar is a highly capable and cost-effective sensor that provides an ideal platform for a wide variety of marine surveillance and ocean observation solutions.”

Globally, approximately 85% of all coastal oceanographic HF radars are CODAR SeaSondes. The foremost maritime security applications pertain to search and rescue, oil spill mitigation, ship detection and marine modelling. “The ship detection application needs to grow before it is ready for prime time,” says Whitehouse, “and we see the definition of maritime security evolving. In the Caribbean, for example, security is all about the first few hundred meters and the effects of such processes as climate change, coral bleaching, beach erosion and coastal flooding. It is all a matter of perspective.”