Ocean intelligence in the Maritime Battlespace: The role of Spaceborne Sensors and HF Radar 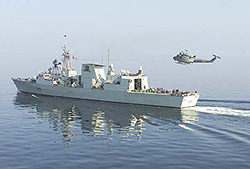 For as long as war has been waged at sea, oceanographic conditions have influenced the performance of naval sensors, weapons, vessels, and personnel. In today’s Navy, this is relevant to submarine operations, anti-submarine warfare, mine countermeasures, amphibious operations, surface and sub-sea navigation, and ship detection. While meteorological sensors and mathematical models have made accurate weather forecasting commonplace, only a few navies are able to forecast the behaviour of the ocean itself, in addition to the atmosphere above it. This oceanographic capability, which has emerged within the last 10 years, represents a substantive military advantage and is the subject of ocean intelligence.

Among NATO countries, the United States and France are the most advanced in this field as a result of developments in the 1990s: the launching of a broad range of oceanographic satellites, advancements in high-performance computing and environmental modelling, and the internet. The United States has also extended its lead in ocean intelligence through the installation of an extensive network of civilian coastal HF radar stations.